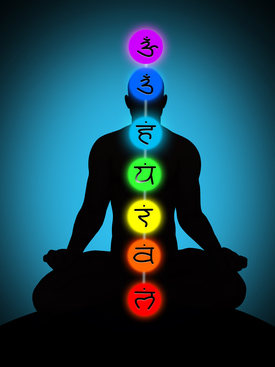 There are many books available that discuss chakras in depth, so this section will be brief.

Chakra is a Sanskrit word meaning “wheel” or “disk” and is used to describe the energy centers of the human body. Chakras have the appearance of spinning vortices (or funnels) of energy and exist on each level of the auric field. Their shape resembles the circular motion of water flowing down a drain. Each has a different color and is associated with a specific area of the body. The root chakra is located at the base of the spine, the crown chakra at the top of the head with chakras two through six appearing on both the front and back of the body. There are seven major chakras and many minor chakras in the human body.

The chakras serve as part of the energy system of the body and play an important role in health and healing. They take the Ki (or life force) energy that is around us and transform it into the various frequencies our body needs and bring it into our energy system. Having an understanding of chakras can be helpful when giving Reiki treatments because any blocks that may be present in a given chakra must be cleared or removed for healing to take place. [1]

In her book “Light Emerging”, Barbara Ann Brennan says, “Chakras function as intake organs for energy from the universal life energy field, which we can also call the universal health field all around us. The energy taken in and metabolized through each chakra is sent to the parts of the body located in the major nerve plexus area closest to each. This energy is very important for the healthy functioning of the auric field and the physical body. In eastern tradition that energy is called the prana, or the ch’i. If a chakra stops functioning properly, the intake of energy will be disturbed. This means that the body organs served by that chakra will not get their needed supply. If chakra dysfunction continues, normal functioning of the organs and other body parts in that particular area will be disrupted. That part of the body will weaken, as will its immune defenses, and eventually disease will occur in that part of the body.”[2]

In the book “The Spirit of Reiki,” Rand says, “Each of the chakras is connected to a subtle energy channel in the spine. The channel is made of three parts: the Sushumna at the core of the spine, considered to be the most important energy channel in the subtle energy system; and the Ida and Pingala that flow back and forth around the outside of the Sushumna. This channel distributes energy throughout the subtle energy system.”[3]
The Root Chakra (first) is connected at the base of the spine, pointing toward the ground. Its color is red and it connects and grounds us to the earth. It is associated with our will to live, supplying our bodies with vitality.

The Sacral Chakra (second) is connected to the sacrum and its color is orange. It is associated with reproduction, sexuality, physical pleasure, and all attractive aspects of relationships. It is also one place where people hide guilt and humiliation and is the primary location of the shadow self.

The Solar Plexus Chakra (third) is connected to our solar plexus and its color is yellow. It directs energy necessary for self-expression and manifests our will. It is the location of confidence as well as the location of fear and anger.

The Heart Chakra (fourth) is connected to the center of the chest near the physical heart and its color is green. It is associated with all aspects of love, joy, respect, and surrender and is associated with spiritual guidance and higher consciousness. It is one of the important chakras whereby Reiki energy enters our system.

The Throat Chakra (fifth) is located in the throat area and its color is blue. It is associated with creative expression through speaking and writing, contemplation, and planning. Through it we manifest how we relate to groups and individuals.

The Brow Chakra (sixth) is located in the area between the eyebrows and its color is indigo. It is often referred to as the “third eye.” It is associated with self-awareness, wisdom, higher consciousness, clairvoyance, visualization, and conceptual thinking.