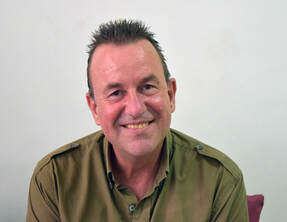 ﻿﻿ Frank Arjava Petter was born in Dusseldorf, Germany. When he turned 18 years old he went to India where he spent several years living in the spiritual commune of Osho Rajneesh, receiving his training in meditation and the art of living in the present.

Later he spent six years in the United States and then he moved to Japan. Arjava lived in Japan for 12 years and while he as there, began to research Reiki with the help of Chetna Kobayashi, his wife at that time. Arjava knows the Japanese language and culture quite well and has many contacts in the Japanese Reiki community. While in Japan he had the privilege to train in Jikiden Reiki with Chiyoko Yamaguchi, who herself had learned Reiki from Dr. Chujiro Hayashi when she was 17 years old.

Arjava is a world renowned Reiki historian and author who has written many books about Reiki and travels worldwide lecturing and teaching Jikiden Reiki workshops. He is a Dai Shihan in Jikiden Reiki and Vice President of the Jikiden Reiki Association founded by Tadao Yamaguchi in Kyoto, Japan.

Arjava continues to research Reiki in Japan and through his tireless efforts and dedication is constantly discovering new information that he happily shares with the world. He left Japan and now resides on Lesvos Island in Greece with his wife Georgia Bhakti and their two children. He may be reached through his webpage:  ​http://www.frankarjavapetter.com/