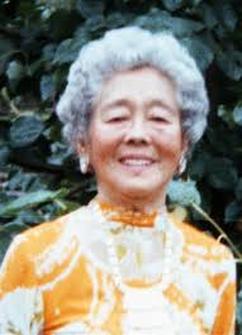 ﻿﻿ Mrs. Hawayo Takata was directly responsible for bringing Reiki from Japan to the United States. She was born on December 24, 1900 and died December 11, 1980. She was the daughter of Japanese immigrants who eventually resettled back in Japan and was married to Saichi Takata who was the bookkeeper at the plantation where she worked. She had two children before her husband died in October of 1930.

Needing to provide for her children, she was forced to work hard with little rest and within five years had developed severe abdominal pain and a lung condition, and eventually had a nervous breakdown. One of her sisters passed away and it was her responsibility to return to Japan to inform her parents. While in Japan she was admitted to a hospital where she was diagnosed with a tumor, gallstones, appendicitis and asthma. She declined surgery and opted to visit Hayashi Sensei at his clinic (the Hayashi Reiki Kenkyukai).[1]

At the clinic she received two treatments each day and within four months was completely healed. She received tests at a local hospital which confirmed her full recovery – without requiring surgery. She was very happy with the results and decided she wanted to learn Reiki so she could maintain her own health while back in Hawaii. In 1936 she was given Shoden (Level 1) by Dr. Hayashi and worked at his clinic for a year giving Reiki treatments to others before receiving Okuden (Level 2).

In 1970 Takata started training students in Shimpiden (Reiki Master). She set the fee at $10,000, completed the training in a weekend and required no apprenticeship.[3] This fee was not part of the Usui System and was possibly set to instill a sense of respect for Reiki.

Marianne Streich says, “Takata practiced and taught Reiki for more than forty years. She was a powerful healer, an engaging teacher, and a successful businesswoman. She facilitated amazing healings, attuned countless men, women, and children to Reiki, and managed a number of business enterprises. What she did not do was leave comprehensive records about her work.”[4]

Mrs. Takata’s teaching style was somewhat unorthodox as she did not follow a specific lesson plan. She taught orally and no two classes were taught the same way. She did not permit note taking or recording of classes, did not permit her students to keep written copies of the symbols, and did not use or provide a manual to her students. She claimed Reiki was an oral tradition and everything had to be memorized.[5]

Marianne Streich discusses some of Takata’s teaching and says, “Takata’s Reiki treatment consisted of what she called a ‘foundation treatment’ followed by a search for the cause of the condition and additional Reiki applied in those specific areas related to the cause. She advocated repeated treatments, daily if possible, for chronic conditions. And she welcomed what she called ‘healing reactions’ as a sign that the body was beginning to heal itself.”[6]

Streich goes on to say, “One of Takata’s guiding principles, which she emphasized repeatedly, was to treat both cause and effect. ‘If you treat only the afflicted area of the body, you may alleviate symptoms temporarily, but permanent healing will not take place unless you treat the cause.’ Takata’s training and experience had taught her that the cause of a condition is often centered, not in the affected area of the body, but elsewhere.”[7]

“After a treatment, especially one for a chronic condition, Takata expected the client to experience a “healing reaction.” This was a release of toxins by the body and could take the form of gastrointestinal upset, flu-like symptoms, headache, or in some instances an intensification of the condition itself.”[8]

At the time very little was known about Reiki and that information came directly from Mrs. Takata herself. Since there was no way to verify the information she provided, it was just assumed to be accurate. However, in recent years, thanks to the efforts of Frank Arjava Petter, William Rand, and a few others, we have discovered that Mrs. Takata took liberties with the history and development of Reiki. It is theorized that this was possibly done as a result of World War II. With the hatred toward the Japanese at that time, it was likely necessary for Mrs. Takata to change some facts in an effort to make Reiki more palatable in America. Some of the common myths surrounding Usui Sensei are discussed in depth in many Reiki books.

Hawayo Takata passed away on December 11, 1980 leaving behind an astounding legacy as a healer and teacher. In her many years of service she healed many people, initiated hundreds students (and twenty-two Masters) and is responsible for Reiki finding its way to America and spreading abroad. She was truly a dedicated healer and leader in the art of Reiki and a testament to the legacy of Usui Sensei and Usui Reiki Ryoho.

After Takata’s death, it was realized that she had never officially acknowledged her successor. Helen Haberly says, “…the story of Reiki has continued in the hundreds of students and the twenty-two Masters she had taught. From these Masters she chose as her successor her granddaughter, Phyllis Lei Furumoto. Although this young woman was trained and empowered to assume the role of Grand Master, Mrs. Takata went into transition without making a formal statement of acknowledgement. From this apparent void stepped forth another Master, Barbara Weber Ray, stating herself also to be Grand Master, successor to Mrs. Takata.”[9]

Note: It is important to note that there is no official title of “Grand Master” in Reiki. Mrs. Takata never applied the title to herself and never passed the title to anyone else.