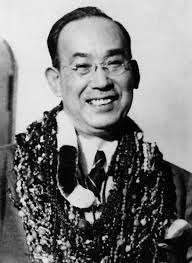 ﻿﻿ Dr. Chujiro Hayashi was born September 15, 1880. He graduated from the Japan Naval Academy in 1902 as a medical doctor, was married and had two children.[1] Most notably, Hayashi Sensei is the Reiki Master who trained Hawayo Takata.

According to Hiroshi Doi, “Chujiro Hayashi Sensei (1880-1940) had been practicing diligently as a member of the Gakkai from the time he was in the navy. He was given Shinpi-den from Usui Sensei in 1925, the 14th year of Taisho period, after his retirement from the navy. As Usui Sensei passed away the next year, Hayashi Sensei was the last Shinpi-den practitioner certified directly by Usui Sensei.”[2]

Hayashi was asked by Usui Sensei to open his own Reiki clinic, which he did. He founded the Hayashi Reiki Kenkyukai (institute) in Tokyo which had eight treatment beds, and opened additional branches in other cities. He left the Gakkai after Usui Sensei’s death.

Hayashi Sensei developed his own style which varied from Usui Sensei. At the Gakkai, clients were seated in a chair and would receive a treatment one-on-one. Hayashi Sensei had clients lying down and receiving their treatments from two or more practitioners. Marianne Streich says, “The Gakkai placed emphasis on the navel and the Tanden as important energy centers, while Hayashi focused more on the meridian lines of acupuncture and the chakras. Usui referenced various vertebrae in relation to hand positions; Hayashi’s reference was to the organs.”[3]

Streich goes on to say, “One practitioner began with the head while the second treated the problem area. If there were a third practitioner, he or she would treat the feet. The soles of the feet were considered next in importance to the head. Practitioners located Byosen and gave Reiki intensely at that location until the Byosen eased. The sequence for treating the head was forehead, back of the head, temples, and crown.”[4]

Hayashi Sensei kept thorough records of patients and their conditions, including which hand positions were most effective during the treatments. He created his own healing guide based on these hand positions and included a copy in the manual which he provided to his students  (Frank Arjava Petter has translated and published this guide, which is available from booksellers). He also developed a more effective attunement process and teaching method which included teaching Shoden (Level 1) and Okuden (Level 2) together in a single five-day seminar.[5]

Shortly before the outbreak of World War II, Hayashi Sensei traveled to Hawaii and spent several months treating clients and teaching with Hawayo Takata. Not long after his return to Japan he took his own life. To this day it is still unknown why Hayashi would do something so drastic. However, it is suspected that upon his return the Japanese government may have asked him to act as a spy and provide information on military installations. He could not say no to his emperor, but neither could he offer information that would kill the very people who he had befriended, treated, and taught. This would have placed him in an impossible situation. As a traditional old-school gentleman and as a retired naval officer, the only honorable option he could see was to end his own life. To this end he retired to his Atami villa and on May 11, 1940 he slit his wrists. [6]
[1] Streich, Marianne, (Fall 2009), The Story of Dr. Chujiro Hayashi, Reiki News Magazine, 36.
[2] Doi, Hiroshi, A Modern Reiki Method for Healing, 36.
[3] Streich, Marianne, (Fall 2009), The Story of Dr. Chujiro Hayashi, Reiki News Magazine, 37.
[4] Ibid., 40.
[5] Rand, William Lee, Reiki: The Healing Touch First and Second Degree Manual, 21-22.
[6] Petter, Frank Arjava, This is Reiki, 87-88.