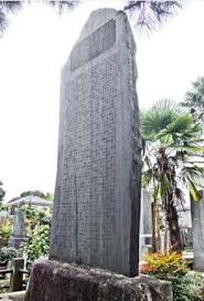 ﻿﻿ In his book “Light on the Origins of Reiki", Tadao Yamaguchi says, “The Usui Reiki Ryoho Gakkai grew rapidly as an organization and their center quickly became too small. A new center was built in Nakano, Tokyo, and opened in February 1925. As their fame spread all over the country, in a lot of areas new branch centers were established. On request Usui Sensei visited many places in Japan in order to popularize Reiki. However, on March 9, 1926 in Hiroshima during one of his Reiki trips Usui Sensei collapsed and died quite suddenly.

Usui Sensei is said to have taught approximately 2,000 students between 1922 and 1926. After he passed away his most prominent students succeeded him to run the organization.”[1]

Usui Sensei’s memorial was erected on February 2, 1927 and is located in Saihoji Temple in the Suginami district of Tokyo.  The large kanji at the top reads, “Memorial of Usui Sensei’s Virtue.”  In his book “A Modern Reiki Method for healing,” Hiroshi Doi - a member of the Usui Reiki Ryoho Gakkai - presents a translation of the inscription:[2]

What you naturally learn through self-discipline and training is VIRTUE, and it is MERIT to voluntarily practice to lead and save people. The person who has many merits and a good deal of virtue can be eventually respected as a great founder. From old times, those who started up new studies and religions – sages, philosophers or geniuses – were like as mentioned above. We can say that Usui Sensei is one of those magnificent leaders.

He started newly a method to improve the body and mind based on the REIKI of the Universe. His reputation attracted people from all around the country at once who wanted to learn Reiki and receive treatments. Really, it was very successful indeed.

Usui-Sensei - first name Mikao and pen name Gyohan - was from Taniai-village, Yamagata-county, Gifu-prefecture. His forefather was Tsunetane Chiba, who had played an active part as a military commander between the end of Heian Period and the beginning of Kamakura Period. His father’s name was Taneuji, but was commonly called Uzaemon. His mother was from the Kawai family. Usui Sensei was born on August 15, the first year of Keio. Having studied while working since childhood, he made great efforts to be far superior to his friends.

After growing up, he went over to Europe and America and studied in China. In spite of his ability, however, he was not always successful in his career advancement. Although he often led a poor life, he strove much more than before to polish his body and mind without flinching from the difficulties.

One day, Usui Sensei climbed Mt. Kurama, where he began to do an ascetic practice while fasting. Suddenly on the twenty-first day, he felt a great REIKI over his head. He was given Satori and Reiki Ryoho at the same time. When he tried it on his own body and with his family, it brought immediate effects. He said, “I must share this power with the general public and enjoy the benefits with them rather than keep it exclusively inside my family.” Usui Sensei moved on to Aoyama Harajuku, Tokyo in April, the eleventh year of Taisho (1922), and established the Gakkai, where Reiki Ryoho was instructed openly to the public and the treatment was given too. People visited him from far and near to ask for his guidance and cure and they overflowed outside of the Gakkai building making a long line.

In September of the twelfth year of Taisho (1923), Tokyo had a very big fire caused by the Great Kanto Earthquake, when the injured and sick suffered from pains everywhere. Usui Sensei felt deep sympathy for them and gave treatments, going around the city every day. We can hardly calculate how many people were saved from death through his devotion. This is just a brief description of his relief activity, in which he extended his hands of love over suffering people in an emergency.

As his training center became too small to receive the visitors, he built a new treatment house and moved to Nakano, outside the city in February the fourteenth year of Taisho (1925). Gaining a growing reputation, he was often invited from everywhere throughout Japan. In accordance with these requests, he traveled to Kure and Hiroshima, then entered Saga and reached Fukuyama. When he was staying at an inn there, he unexpectedly became sick and passed away there at the age of sixty-two.

His wife, Sadako, from the Suzuki family, had a son and daughter with him. Their son’s name was Fuji, and he succeeded the Usui family.

Usui-Sensei’s natural character was gentle and modest, and he never showed off. His body was big and sturdy, and his face was always filled with a warm smile. But when he confronted difficulties, he went ahead with a strong will and persevered well, yet kept extremely careful. He was a man of versatile talents, and also a book lover, possessing a great deal of information on a wide range of subjects, from history, biography, medical science, and from the canons of Christianity, Buddhism and psychology to the magic of the ascetic, the art of the curse, the science of divination and physiognomy. It was evident to everybody that Usui Sensei’s cultivation and self-discipline were based on his career of art and science, and this cultivation and self-discipline became a clue to the tenets of Reiki Ryoho.

Reiki Ryoho is aiming not only at how to heal diseases but also at how to correct Kokoro, keep the body healthy, and to enjoy the happiness of life by a God-sent spiritual ability. Therefore, when teaching, we first let the students understand the last instructions of the Meiji Emperor, and chant Go-kai morning and evening to keep them in mind.

The Go-Kai says: 1) Do not be angry, 2) Do not worry, 3) Be thankful, 4) Do what you are meant to do, 5) Be kind to others. These are truly important precepts for mental cultivation, just the same as those by which the ancient sages admonished themselves. Usui Sensei attributed Go-kai as being the secret to inviting in happiness and the miraculous medicine that cures all diseases. He clearly showed his purpose of teaching the Go-kai. Furthermore, he tried to teach as easily and simple as possible – so nothing was difficult to understand. Each time you sit quietly and Gassho and chant Go-Kai morning and evening, you aid in the development of a pure and sound mind, and this is the essence for making the most of this in your daily life. This is the reason why Reiki Ryoho is accepted very easily by everybody.

The social situation is very changeable these days, and people’s thoughts are apt to change, too. If we would most fortunately succeed in spreading Reiki Ryoho everywhere, we feel sure that it would certainly be very helpful in preventing people from disordering their moral sense. Its benefits stretch even farther than the curing of long term illnesses, chronic diseases and bad habits.

The number of students who learned from Usui Sensei amounts to more than 2,000 persons. Some leading students in Tokyo are taking over his work in the training center, while other pupils outside of Tokyo also do everything to popularize Reiki Ryoho. Although our teacher already passed away, we have to do the very best to hand Reiki Ryoho down to the public forever and spread it much more. Ah! What a great thing he did; he generously shared what he had experienced by himself!

As a result of our recent meeting and discussion, we decided to erect a memorial stone at the graveyard in his family temple so that we could share his virtuous deeds and leave them for posterity; I was asked to write the epitaph on the monument. As I was deeply impressed by our Sensei’s great meritorious deeds and also struck by the students’ warm hearts in a bond with our Sensei, I dared not refuse the request, but described the outline on it. Therefore, I do expect from the heart that people in the future will look up at this monument with boundless admiration and deep respect for our Sensei.

February, the 2nd year of Showa.

Edited by Masayuki Okada,
The Junior 3rd Rank, the 3rd Order of Merit, Doctor of Literature

Calligraphy by Juzaburo Okada,
The Junior 4th Rank, the 3rd Order of Merit, the 4th Class of Services, Rear Admiral